Home Lifestyle From France to South America, this artist creates art with snowshoes and...
Lifestyle

From France to South America, this artist creates art with snowshoes and a rake

Sixty-two-year-old Simon Beck creates intricate patterns on beds of snow and sand, some as large as soccer fields

While you were rolling on the ground, flailing your arms to create that snow angel, Simon Beck just walked through snow, creating art. His works, which look like large intricately patterned carpets, are primarily created using his snowshoes. The 62-year-old snow artist, who shuttles between France and the UK, has been doing this for the last 16 years.

Each piece of snow art involves mathematical calculations, a compass and of course imagination. “It’s a four-stage process,” explains Simon over an email interview from Taunton, in the UK. It starts with careful measuring using a magnetic compass, pace counting, and sometimes rope-and-anchor for accurate circles. The accuracy of the finished art depends on getting this stage correct, he says. “This is followed by drawing the remaining lines and joining together points plotted accurately in the previous stage, making the fractal edge, followed by shading certain areas. 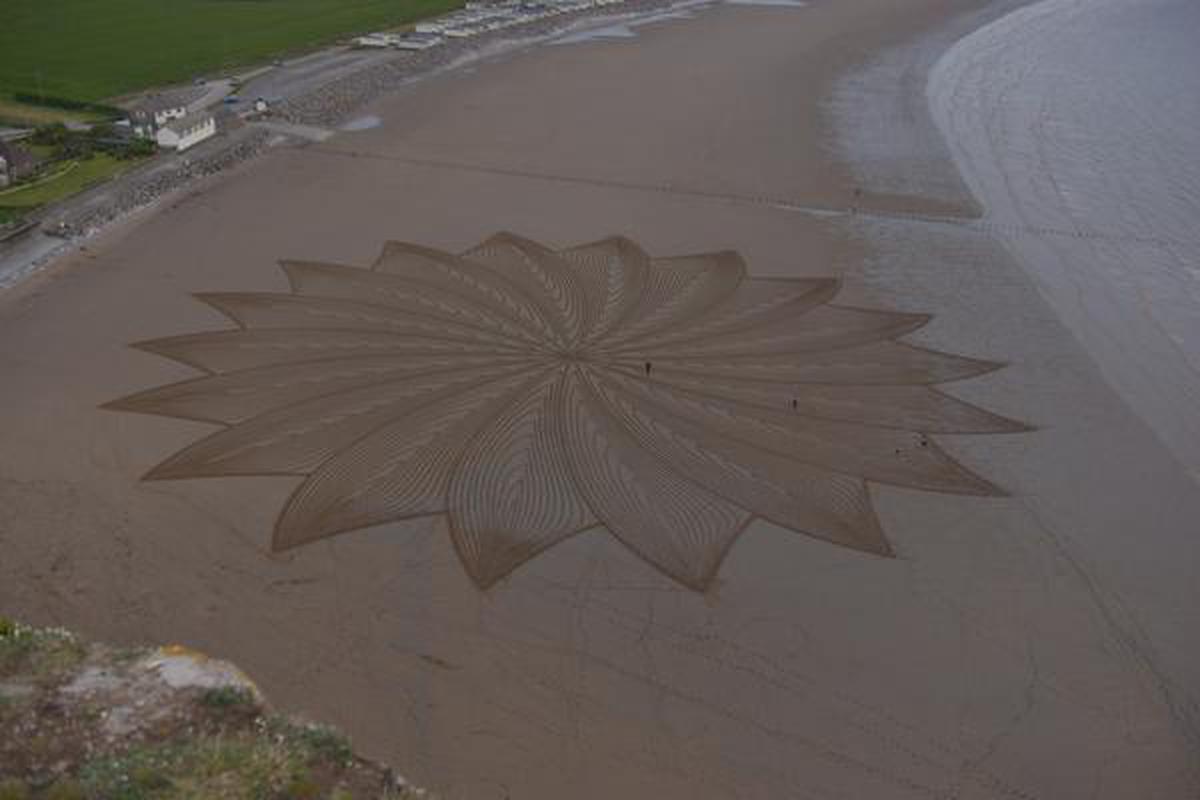 So far Simon has created 350 designs on snow and 157 on sand. These include geometric art and mandala patterns. “One day, I want to reproduce Pablo Picasso’s Guernica (a large oil painting on canvas that is on display at the Museo Reina Sofia in Madrid),” he says, . While Picasso had his paint brush, Simon’s choice of weapon are his snow shoes while working with snow, and a trusty rake (with a weight attached to it) while working on beaches and sandy surfaces. It all started in 2004 when he first drew something “for a bit of fun.” On a small frozen lake outside his winter home in Les Arcs, France, Simon created a five-pointed star with balloon-like shapes. Even though he did not have a camera to capture it, there were others who took great delight in clicking pictures of this novel work.

“In 2009, I decided to take it up seriously and make as many as possible, giving it priority over skiing when conditions were good,” says Simon. While recuperating from a minor surgery he started a Facebook page that features his works and that is how people got to know of him.

Simon was a cartographer for 20 years, specialising in maps for orienteering competitions. This background has helped him understand the scale — when creating art across large expanses of snow — and symmetry. 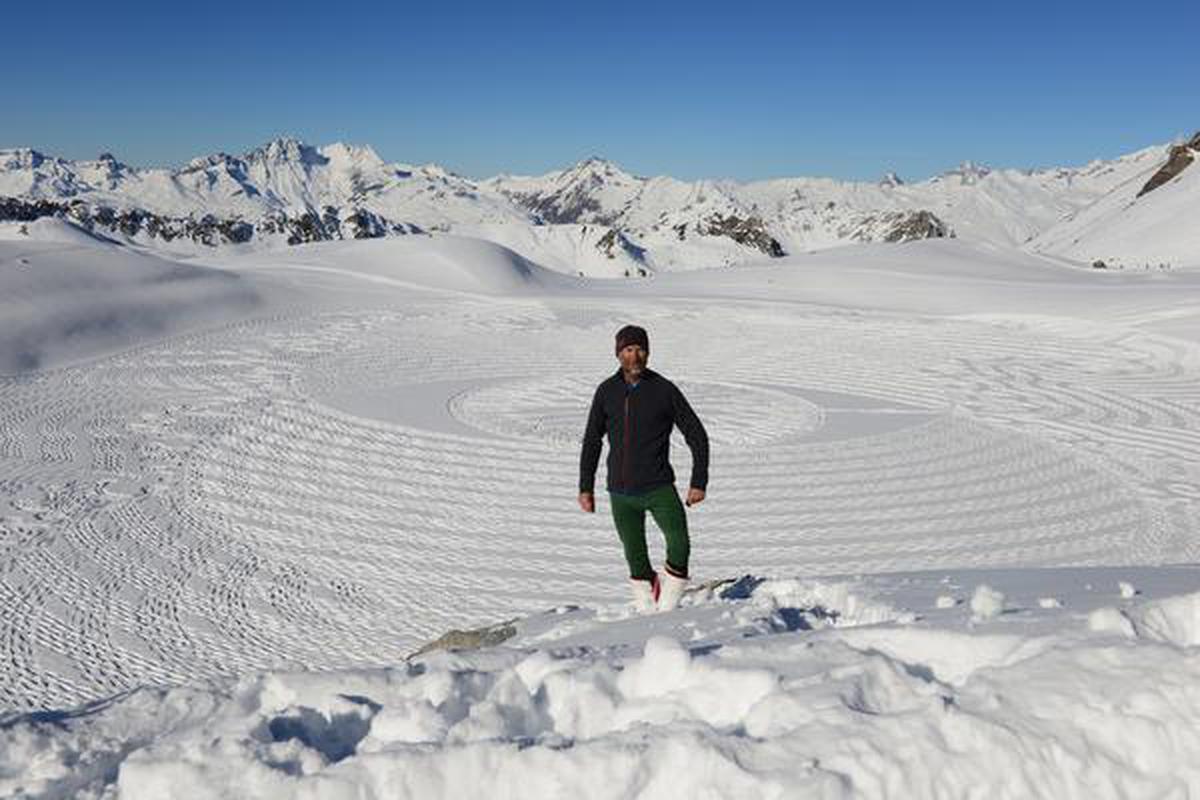 “I can do an area of three soccer fields in one day,” says Simon, adding that he can work for up to 12 hours in a day if the snow is not too heavy. And how does he find these locations to draw across? “At home in Les Arcs there are four good locations. Otherwise, the people flying me for an away gig usually have already chosen the location,” he says. So far, the most dramatic spot for his display has been Jungfraujoch in Switzerland.

One of his largest works is a snow drawing that he made in 2013, in Arc2000 (a ski resort), France. It was about the area of 10 soccer fields (one field is approximately 110-120 yards (100-110 meters) long by 70-80 yards (64-73 meters) wide). “But two hours before it was completed, the sky clouded over and I did not get good photos of the result, which was very disappointing,” he says. He is aware of the impermanence of his art. But then, nothing lasts for ever and he is happy that technology allows his work to be captured for posterity.

Since Simon’s works cover a large area, they are best visible from a higher altitude. “In Les Arcs there are viewpoints for ground-based photography, but it’s time I learnt to fly a drone,” he says. 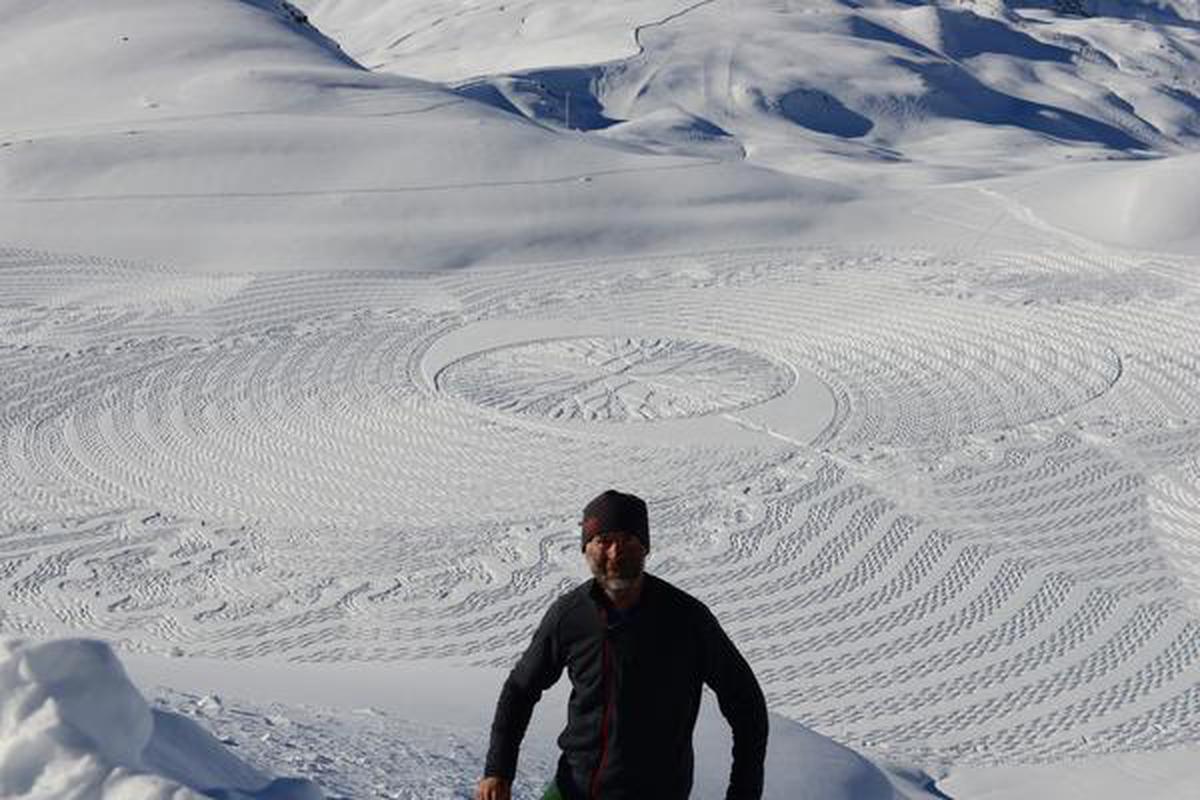 Undeterred by the pandemic, though it has limited paid gigs, he has been drawing on the beach near his house, whenever it is not too windy. With a number of appreciative spectators, does he plan to impart lessons on his unique skill, online? “The art form is too dependant on being able to do it for real in the snow. Virtual classes are OK for learning theory, but that’s all,” he says.

Currently unsure about the future of his work, given the current situation with COVID-19, he also has questions about what lies ahead for the travel and tourism industry, and the functioning of ski resorts. But no matter the outcome, what he knows is that he will continue drawing as long as he is physically able to.

Mauritius reopens: Get ready to swim with dolphins

Starting July 15, travellers can soak in the sun on this island in the Indian Ocean Mauritius is getting all spruced up as it prepares...
Read more
Lifestyle

The COVID-19 pandemic affected the population of India both directly and indirectly. People either became a victim of this disease or were a form...
Read more
Lifestyle

The trend indicates the global travel market is witnessing a recovery, with an uptick in vaccinations and eased lockdown restrictions in several parts of...
Read more

Translate »
We use cookies for various purposes including analytics and personalized marketing. By continuing to use the service, you agree to our use of cookies.